Now that we’ve created the Lambda function IAM role, for the sake of simplicity, let’s assume the function itself is already written and packaged sitting in an S3 bucket that your Lambda function Role will have access to.  For this example, let’s assume our S3 URL for this backup function is: s3://my-awesome-lambda-functions/ec2_backup_manager.zip

The IAM policy rights required for creating the Lambda function and the Scheduled Event are:

Note: Like the previous boto3 example, you must either have your AWS credentials defined in a supported location (e.g. ENV variables, ~/.boto, ~/.aws/configuration, EC2 meta-data) or you must specify credentials when creating your boto3 client (or alternatively ‘session’).  The User/Role associated with the AWS credentials must also have the necessary rights, defined by policy, to perform the required operations against the AWS Lambda API.

A few notes on the creation_function function arguments

In the previous step we created an IAM role that we reference in the code below when creating our Lambda function.  Since IAM is an AWS region independent service it takes some time – usually less than a minute – for create/update/delete actions against the IAM API to replicate to all AWS regions.  This means that when we perform the create_function operation in the script below, we may very well receive an error from the Lambda API stating that the role we specified does not exist.  This is especially true when scripting an operation where the create_function operation happens only milliseconds after the create_role function.  Since there is really no way of querying the Lambda API to see if the role is available in the region yet prior to creating the function, the best option is to use exception handling to catch the specific error where the role does not yet exist and wrap that exception handler in a retry loop with an exponential back-off algorithm (though sleeping for 10-15 seconds will work just fine too).

Let’s pick up in the python script where we previously left off in the last example: 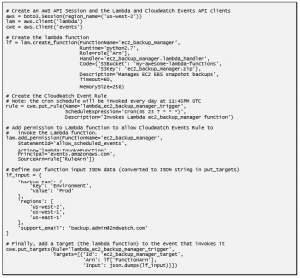 Note: The S3Bucket MUST exist in the same region you are launching your CFT stack in.  To support multi-region templates I generally will have a Lambda S3 bucket for each Lambda region and append a .{REGION_NAME} suffix to the bucket name (e.g. my-awesome-lambda-functions.us-west-2).  Since CloudFormation provides us with a psuedo-parameter of the region you are launching the stack in (AWS::Region), you can utilize that to ensure you are referencing the appropriate bucket (see my example below).

The following block of JSON can be used in conjunction with our previous CloudFormation snippet by being added to the template’s “Resource” section to create the Lambda function, CloudWatch Event, and Input: If you implement your Lambda functions using either of the two examples provided you should be able to reliably create, , manage, automate and scale them to whatever extent and whatever schedule you need.  And the best part is you will only be charged for the ACTUAL compute time you use, in 100ms increments.

Now go have fun, automate everything you possibly can, and save your organization thousands of dollars in wasted compute costs!  Oh, and conserve a bunch of energy while you’re at it.