How We Organize Terraform Code at 2nd Watch

When IT organizations adopt infrastructure as code (IaC), the benefits in productivity, quality, and ability to function at scale are manifold. However, the first few steps on the journey to full automation and immutable infrastructure bliss can be a major disruption to a more traditional IT operations team’s established ways of working. One of the common problems faced in adopting infrastructure as code is how to structure the files within a repository in a consistent, intuitive, and scaleable manner. Even IT operations teams whose members have development skills will still face this anxiety-inducing challenge simply because adopting IaC involves new tools whose conventions differ somewhat from more familiar languages and frameworks.

In this blog post, we’ll go over how we structure our IaC repositories within 2nd Watch professional services and managed services engagements with a particular focus on Terraform, an open-source tool by Hashicorp for provisioning infrastructure across multiple cloud providers with a single interface.

The task in any new repository is to create a README file. Many git repositories (especially on Github) have adopted Markdown as a de facto standard format for README files. A good README file will include the following information:

It’s important that you do not neglect this basic documentation for two reasons (even if you think you’re the only one who will work on the codebase):

All repositories should also include a .gitignore file with the appropriate settings for Terraform. GitHub’s default Terraform .gitignore is a decent starting point, but in most cases you will not want to ignore .tfvars files because they often contain environment-specific parameters that allow for greater code reuse as we will see later.

Here’s what our roots directory might look like for a sample with a VPC and 2 application stacks, and 3 environments (QA, Staging, and Production): 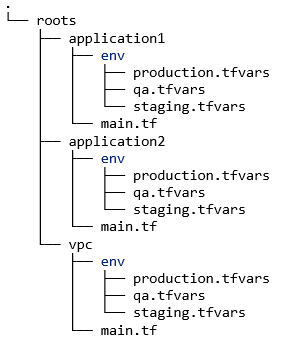 Terraform modules are self-contained packages of Terraform configurations that are managed as a group. Modules are used to create reusable components, improve organization, and to treat pieces of infrastructure as a black box. In short, they are the Terraform equivalent of functions or reusable code libraries.

In this post, we’ll only be covering internal modules. Terraform and Other Tools

Terraform is often used alongside other automation tools within the same repository. Some frequent collaborators include Ansible for configuration management and Packer for compiling identical machine images across multiple virtualization platforms or cloud providers. When using Terraform in conjunction with other tools within the same repo, 2nd Watch creates a directory per tool from the root of the repo: Putting it all together

The following illustrates a sample Terraform repository structure with all of the concepts outlined above:

There’s no single repository format that’s optimal, but we’ve found that this standard works for the majority of our use cases in our extensive use of Terraform on dozens of projects. That said, if you find a tweak that works better for your organization – go for it! The structure described in this post will give you a solid and battle-tested starting point to keep your Terraform code organized so your team can stay productive.

For help getting started adopting Infrastructure as Code, contact us.